Congress authorized a new acquisition pathway for projects selected by the SAE as being one of the most promising, innovative, and cost-effective prototypes that is expected to be successfully demonstrated in a relevant environment. 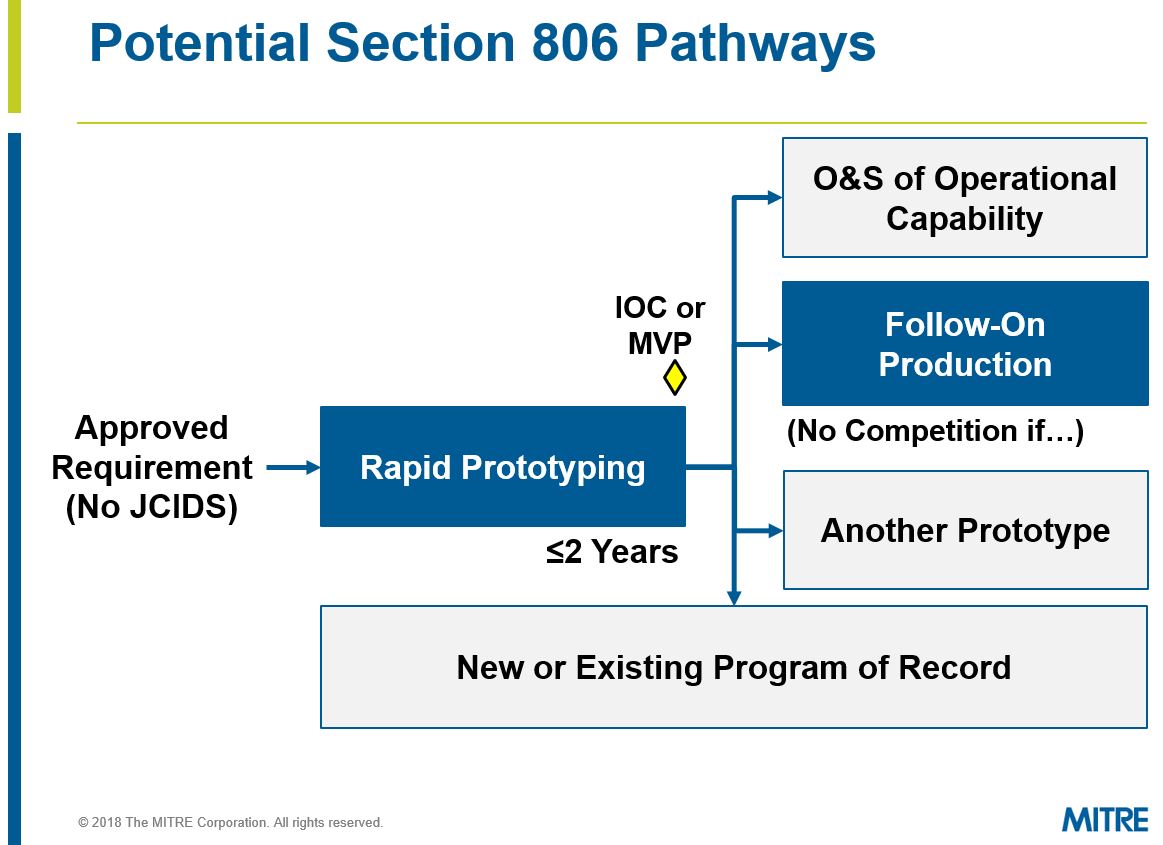 (a) Development, Prototyping, and Deployment of Weapon System Components or Technology.–

(1) In general.–Chapter 144B of title 10, United States Code, as added by section 805, is further amended by adding at the end the following new subchapter:

DEVELOPMENT, PROTOTYPING, AND DEPLOYMENT OF WEAPON SYSTEM COMPONENTS OR TECHNOLOGY

(a) Requirements for Budget Display.–In the defense budget materials for any fiscal year after fiscal year 2017, the Secretary of Defense shall, with respect to advanced component development and prototype activities (within the research, development, test, and evaluation budget), set forth the amounts requested for each of the following:

(2) Development, prototyping, and experimentation of  weapon system components or other technologies, including those based on commercial items and technologies, separate from acquisition programs of record.

(3) Other budget line items as determined by the Secretary of Defense.

(b) Additional Requirements.–For purposes of subsection (a)(2), the amounts requested for development, prototyping, and experimentation of weapon system components or other technologies shall be—

(1) structured into either capability, weapon system component, or technology portfolios that reflect the priority areas for prototype projects; and

(2) justified with general descriptions of the types of capability areas and technologies being funded or expected to be funded during the fiscal year concerned.

(c) Definitions.–In this section, the terms `budget’ and `defense budget materials’ have the meaning given those terms in section 234 of this title.

(a) Establishment.–The Secretary of each military department shall establish an oversight board or identify a similar existing group of senior advisors for managing prototype projects for weapon system components and other technologies and subsystems, including the use of funds for such projects, within the military department concerned.

(b) Membership.–Each oversight board shall be comprised of senior officials with–

(1) expertise in requirements; research, development, test, and evaluation; acquisition; sustainment; or other relevant areas within the military department concerned;

(2) awareness of technology development activities and opportunities in the Department of Defense, industry, and other sources; and

(c) Functions.–The functions of each oversight board are as follows:

(1) To issue a strategic plan every three years that prioritizes the capability and weapon system component portfolio areas for conducting prototype projects, based on assessments of–

(B) capability gaps or readiness issues with major weapon systems;

(C) opportunities to incrementally integrate new components into major weapon systems based on commercial technology or science and technology efforts that are expected to be sufficiently mature to prototype within three years; and

(3) To annually recommend to the service acquisition executive of the military department concerned specific weapon system component or technology development and prototype projects, subject to the requirements and limitations in section 2447c of this title.

(4) To ensure projects are managed by experts within the Department of Defense who are knowledgeable in research, development, test, and evaluation and who are aware of opportunities for incremental deployment of component capabilities and other technologies to major weapon systems or directly to support warfighting capabilities.

(5) To ensure projects are conducted in a manner that allows for appropriate experimentation and technology risk.

(6) To ensure projects have a plan for technology  transition of the prototype into a fielded system, program of record, or operational use, as appropriate, upon successful achievement of technical and project goals.

(7) To ensure necessary technical, contracting, and financial management resources are available to support each project.

(8) To submit to the congressional defense committees a semiannual notification that includes the following:

(A) each weapon system component or technology prototype project initiated during the preceding six months, including an explanation of each project and its required funding.

(B) the results achieved from weapon system component prototype and technology projects completed and tested during the preceding six months.

(a) Limitation on Prototype Project Duration.–A prototype project shall be completed within two years of its initiation.

(b) Merit-based Selection Process.–A prototype project shall be selected by the service acquisition executive of the military department concerned through a merit-based selection process that identifies the most promising, innovative, and cost-effective prototypes that address one or more of the elements set forth in subsection (c)(1) of section 2447b of this title and are expected to be successfully demonstrated in a relevant environment.

(c) Type of Transaction.–Prototype projects shall be funded through contracts, cooperative agreements, or other transactions.

(A) the Secretary of the military department, or the Secretary’s designee, approves a larger amount of funding for the project, not to exceed $50,000,000; and

(B) the Secretary, or the Secretary’s designee, submits to the congressional defense committees, within 30 days after approval of such funding for the project, a notification that includes–

(ii) expected funding for the project; and

(iii) a statement of the anticipated outcome of the project.

(2) The Secretary of Defense may adjust the amounts (and the base fiscal year) provided in paragraph (1) on the basis of Department of Defense escalation rates.

(e) Related Prototype Authorities.–Prototype projects that exceed the duration and funding limits established in this section shall be pursued under the rapid prototyping process established by section 804 of the National Defense Authorization Act for Fiscal Year 2016 (Public Law 114-92; 10 U.S.C. 2302 note). In addition, nothing in this subchapter shall affect the authority to carry out prototype projects under section 2371b or any other section of this title related to prototyping.

(a) Selection of Prototype Project for Production and Rapid Fielding.–A weapon system component or technology prototype project may be selected by the service acquisition executive of the military department concerned for a follow-on production contract or other transaction without the use of competitive procedures, notwithstanding the requirements of section 2304 of this title, if–

(1) the follow-on production project addresses a high priority warfighter need or reduces the costs of a weapon system;

(2) competitive procedures were used for the selection of parties for participation in the original prototype project;

(3) the participants in the original prototype project successfully completed the requirements of the project; and

(4) a prototype of the system to be procured was demonstrated in a relevant environment.

(b) Special Transfer Authority.–(1) The Secretary of a military department may, as specified in advance by appropriations Acts, transfer funds that remain available for obligation in procurement appropriation accounts of the military department to fund the low-rate initial production of the rapid fielding project until required funding for full-rate production can be submitted and approved through the regular budget process of the Department of Defense.

(2) The funds transferred under this subsection to fund the low-rate initial production of a rapid fielding project shall be for a period not to exceed two years, the amount for such period may not exceed $50,000,000, and the special transfer authority provided in this subsection may not be used more than once to fund procurement of a particular new or upgraded system.

(c) Notification to Congress.–Within 30 days after the service acquisition executive of a military department selects a weapon system component or technology project for a follow-on production contract or other transaction, the service acquisition executive shall notify the congressional defense committees of the selection and provide a brief description of the rapid fielding project.

(b) Addition to Requirements Needed Before Milestone A Approval.–

(3) by inserting after paragraph (7) the following new paragraph (8):

(8) that, with respect to a program initiated after January 1, 2019, technology shall be developed in the program (after Milestone A approval) only if the milestone decision authority determines with a high degree of confidence that such development will not delay the fielding target of the program, or, if the milestone decision authority does not make such determination for a major system component being developed under the program, the milestone decision authority ensures that the technology related to the major system component shall be sufficiently matured and demonstrated in a relevant environment (after Milestone A approval) separate from the program using the prototyping authorities in subchapter II of chapter 144B of this title or other authorities, as appropriate, and have an effective plan for adoption or insertion by the relevant program; and”.