The somewhat natural adversity between Acquisition policy makers/keepers and the acquirers in the field can be shifted to cooperative and productive. What’s needed is better feedback and a solid effort to understand the gaps between what policies say and what actually must happen to get the job done. Consider how often employees receive awards not for doing great things within the system but for finding ways to work around the system and still be legal. 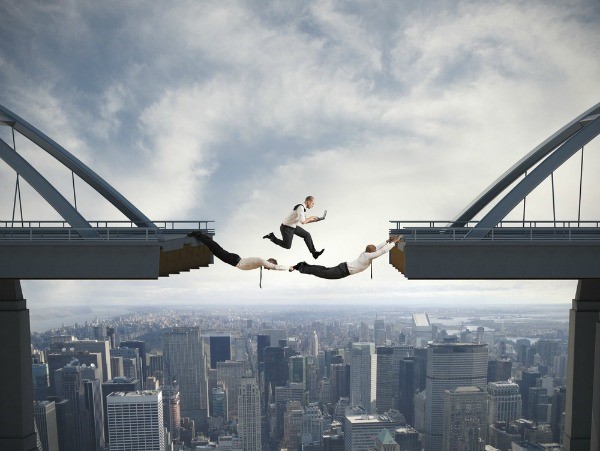 Better feedback and a solid effort to understand the gaps between what policies say and what actually must happen to get the job done necessary  are needed to bridge the gap between policy makers and those who carry their policies out.

Policy makers are often viewed as inaccessible and sometimes oblivious residents of ivory towers while the policy keepers (usually Policy or Clearance offices located on the acquirer’s installation) are viewed either as “road blocks” or “scapegoats.” Little in-between exists for procurement analysts and reviewers in the field. Policy keepers are blamed as obstacles to getting on contract or they’re blamed for anything that goes wrong: “My procurement analyst said I could!” or “My file was reviewed by Policy and they didn’t catch my mistake so it’s not my fault!”

On the other hand, policy keepers often view acquirers who are not following a policy as either rebels or untrained. Following a policy is more important than the results, good or bad. Policy work tends to attract rule-followers, not rule breakers, and they sometimes can’t reconcile the importance of a mission vs making sure all policies are enforced, which technically is their job. Even a high priority requirement backed by an Urgent Operational Need (UON) can be questioned to excess and judged not urgent enough because the policy keeper interprets a months-long delay in funding as proof the requirement isn’t urgent enough.

I use the term keepers rather than enforcers because the latter suggests that the goal of the Policy office is to be adversarial rather than to assist, to interpret, to partner with the acquirer in benefitting from the policies they as counselors and graybeards “keep” for the Acquisition field. In fantasy literature, these would be the watchers and mentors over the less experienced heroes-to-be, guiding them but also listening.

Over the last 30 years, the pendulum has swung back and forth several times between whether the Policy office or the Program Office has the power, rather than a long balance in working together. In some eras, the policy reviewer is deemed “just advisory” and in others, procurement analysts in the Policy organizations are in total control of the acquisition, acting not as advisors but as gatekeepers to approval. In eras where the policy keepers are advisory, such work tends to attract and retain senior contracting personnel who use the position to teach. In eras where the policy keepers are the enforcers, the work attracts and retains senior contracting personnel who are more conservative, which may be why the Frozen Middle is prevalent in some Policy offices.

Ideally, policy makers would see a circuit of responses flowing back to them, either directly or via the policy keepers, but when the relationship to the acquirers is most contentious, the flow is one way—down. The acquirers become frustrated by their inability to either change the policies or get any relief from them, and either flat-out break the rules (“It’s just policy, not statute or regulation.”) or quietly find a way around the rules, where interpretation is gray rather than black and white.

Other staff organizations may or may not be able to assist the acquirer. The Acquisition Center of Excellence (ACE), for example, may insist on opposite interpretations of policies or may be in their own identity dilemma of whether to be task givers, reviewers, or “workforce multipliers” who roll up their sleeves and wade in with the acquirer to get the job done.

Lending to the frustration is the often blatant misunderstanding of what a new policy demands, and particularly why. Policy makers may be deeply familiar with the problem that requires a new policy be written, so much so that subtle phrasing may result in confusion for both policy keepers and acquirers trying to decipher the policy makers’ intent. A great example of this is when the policy makers provide an example but the example is interpreted in the field as a template that must be followed.

Some of this confusion can be eliminated when draft policy is shared not just with policy keepers but also the acquirers, provided any request for input is sincere and brief enough that acquirers have time to review it in a frictionless way. Acquirers are usually too busy with their regular workloads to spend significant time reviewing upcoming policies that will affect them, so a more efficient way of getting the message down to the acquirer is needed, whether it’s a two-minute video clip from the policy writer explaining “what we were thinking” or it’s a brief bullet-format synopsis that can allow more in-depth feedback for acquirers who view the changes as showstoppers.

The acquirer, to be responsive to the mission, may end up living with “this is what Policy says, but this is how we get it done in spite of Policy.” This may be a one-time deal or the acquirer’s team might have its own liturgy for getting a requirement on contract.

Rarely does policy response flow back up the chain. The Policy office usually acts as a gate for policy distribution and education, but the gate doesn’t usually swing the other way. If the acquirer is unhappy with a policy and wants it changed, it’s rare in the current era that a procurement analyst or policy chief will advocate for dissolving the policy.

Lessons from Other Professions

According to Franz Johansson’s The Medici Effect: Breakthrough Insights at the Intersection of Ideas, Concepts, and Cultures, we can bring ideas from one field to another.   Policy issues in Acquisition are probably most similar to policy issues in the education and healthcare fields as both also concern threats to the well-being of others, even to the point of a life or death situation.

In the education field, school policies’ stated purpose is primarily child safety and education and are directed at students, parents, and staff/teachers. Education policies can be initiated or changed by parents, students, teachers, administrators, or anyone in the school’s community, but the process is often political in tone, even political at the local level. The process of policy making and revising may easily include petitions, walk-outs, or media involvement, and supporters outside the school might put pressure on the school administrators to change policy. Although some schools have excellent methods of revising policy as needed, most policy changes are mired in emotion, as would be expected when considering the safety of children.

A better match for studying how other career fields view policy-making and emulating their best practices is healthcare. In the medical field, policies are meant primarily to ensure standardized quality care, patient safety, and prevention of errors. As healthcare as moved from physicians with independent practices to corporations, physicians have become less involved in creating policy. As with Acquisition, those most affected by policies do not typically participate in the creation of policy. Like the acquirer, the physician is the front-line of the career field.

One study in the Journal of the Association of American Medical Colleges suggests that policy is generally not understood by physicians because it is not taught in medical school and that medical students should be taught that they can change or influence healthcare policies.

Specifically, the medical students participating in the study were taught to ask questions regarding policies. While caring for their patients, they looked at which policies helped or hindered the correct diagnosis and treatment, and decided whether to intervene. Next, they researched the relevant policy and created a plan for action to change the policy.

Healthcare policies—not unlike Acquisition policies—can become outdated and negatively affect customer care. Policies become overburdened with unnecessary language and legalese, needing a lawyer just to understand it. One hospital solved a specific policy issue by allowing physicians to adapt the policy to the patient’s unique needs if necessary.

While most hospitals review their policies annually or, less preferably, every one to three years, one of the most proactive policy making/keeping plans I found in my research included keeping a tracker of policies and their review/revise dates so that the policy owner could have adequate time to prepare for the review date, ensuring that the policy-making committee was multi-disciplinary, and maintaining a strong feedback system—feedback being crucial.

Acquisition policies are needed but instead of driving a wedge between the policy makers/keepers and the acquirers trying to get their requirements on contract, these polarities can find ways to understand each other better and change policies so they are most effective both in providing a consistent standard of “care” without being a barrier to saving lives and time.

The following recommendations could improve how policies are made and implemented in the Acquisition field:

Review all policies at least once a year. Review should be allowed at the multi-functional, in-the-trenches, worker-bee level. If the review is carried out only at the policy maker level—who likely wrote the policy or initiated it—or the policy keeper level—who enforces the policy but doesn’t live with its consequences on a daily basis, then the policies will probably not be changed or updated.

Policies still in draft should be run through an independent set of eyes in the field. Not a review by the policy makers who are so familiar with the policy that they cannot understand how a third party would view it. Not the policy keepers, though they should be included, whose job it is to carry out the policies handed down to them.   Policy writers need to know their work passes the “Does this make sense?” test by sharing it with colleagues who are not down in the muck writing the policy with them but are down in the muck with how it will affect daily acquisition practices.

Contracting Officers and Program Managers should be allowed to adapt policies under certain circumstances, such as urgent requirements or specific emerging technology. Policies are not statutes and shouldn’t be treated with the same weight, so allowing adaptation gives the acquirer more leeway to move rapidly.

Make policy input a two-way street so that the acquirer can suggest changes at any time and the policy keepers act as intermediaries–rather than policy cops–to help recommend changes to policy makers and flow them up to the maker of the policy for improvement.