Mountains in the Stream 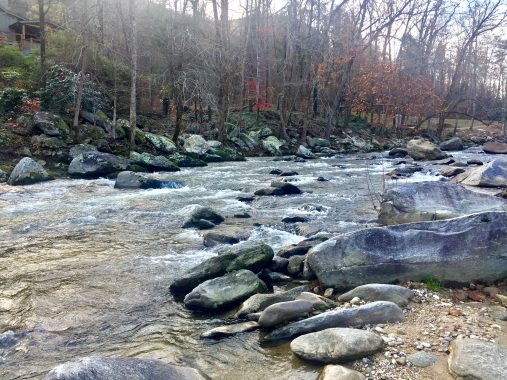 Tired of swimming upstream in Acquisition? Fortunately, there’s another way to get there.

The stream is one of those recurring metaphors that shows up throughout all aspects of my life, everything from the Acquisition field to personal views on life, love, spirituality, immortality.

Maybe that’s why at Thanksgiving 2020, I found myself in the middle of a stream, literally.

A long-time friend and positivity guru has often told me to look to the downstream. She tells me to “go with the flow.”

“Sit back and let things come to you,” she says. “Stop fighting the waters to swim upstream.”

Eh, it’s not that easy. Not for me, anyway. And certainly not in the Acquisition world. If I don’t fight my way upstream, what I want often does not flow anywhere at all, especially not downstream to where I’m waiting impatiently.

After almost nine months of voluntarily quarantining, I knew I had to do something different to rejuvenate, so I hopped in the car and drove to a little mountain cabin where I spent several days hiking and wading streams. Alone with Nature, I had time to think.

As I sat on a boulder in the middle of a shallow river, I fell in love with how the fast-moving water hit the large boulders and either turned to froth or waterfalls off the sides. I sat for hours looking upstream, just watching, and occasionally veering back to downstream which somehow wasn’t quite as interesting. Yes, it was smoother waters, but the action was upstream.

If you’ve ever been an innovator in a bureaucracy, you know how hard swimming upstream can be. And if you lose your footing and get carried away by the current, there are always big rocks you can bash yourself against and the rocks will win. Not quite how I want to be carried downstream, thank you.

Streams aren’t always so simple as just going upstream or downstream. I’ve taken the Myers-Briggs quiz many times over the years, and I always alternate between INFJ and INFP. A business instructor finally explained to me that there are subtle differences in understanding how each perceives time. When one says, “Let’s move that meeting UP two hours,” meaning to 10AM instead of noon, the other thinks of UP as 2PM. This is why I’ve learned always to reiterate the exact time when someone wants to move a meeting up, out, or back.

The other part of understanding the difference in perceiving time is the stream of time itself and how we interact with it. Some people view the stream of time as coming at them, head-on, and passing over them, while others view it as moving in front of them from right to left. For me, it’s standing in the middle of the stream while it goes by from left to right.

I was pondering this for about two hours on the boulder in the middle of the mountain stream, looking upstream at all that froth and movement, and decided that I really do like the upstream. Including in Acquisition. Maybe especially in Acquisition.

Yes, it’s harder to swim upstream, I realized, but it’s not the only way to get upstream.

There are boulders in the Acquisition stream, and lots of them. I don’t have to conquer them all. I’ve accepted that I can’t conquer them all. But what I can do—what we all can do—is conquer one boulder at a time, one rock in the stream of Acquisition at a time, taking more care with some than others not to slip and to get my right footing to jump to the next. I may not be able to move upstream as fast as I’d like or get to the point where it’s a smooth boat ride down without hitting any rocks, but I can move closer to where I want to be, one big rock at a time.

And if you want to hop onto the same rock I’m on? I promise you there’s room for both of us.