DoD’s Lack of Agility is a National Security Risk

​Flexibility is the key to airpower. Speed and agility are the keys to national security.

Yet the DoD lacks the agility to be responsive to change in this dynamic national security environment.

Gallup interviewed nearly 10,000 Americans and Europeans regarding agility in their organization. Do they have the right tools, processes, and mindset to respond quickly to business needs? As a result, Gallup found eight factors that drive organizational agility 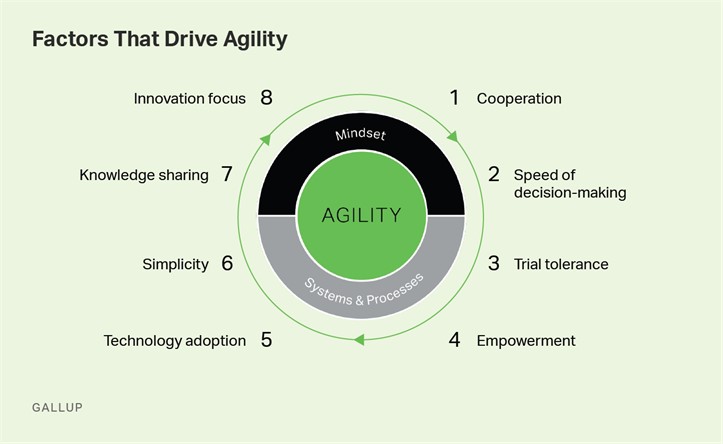 Meanwhile, DoD is the world’s biggest bureaucracy. As McKinsey noted in 2017:

“Volatility, uncertainty, complexity, and ambiguity are so pervasive they have spawned a military acronym: VUCA. Yet the inherently bureaucratic national-security institutions have failed to keep pace. The DoD still largely governed by the Goldwater-Nichols Act of 1986, which focused more on procurement efficiency and unity of command than responsiveness to volatility, uncertainty, and the rest.”

However, in this dynamic national security environment, agility is critical to our success as a nation. Whether it’s responding to the war in Ukraine, a global pandemic, or China threating Taiwan, the one thing constant is change. With a growing array of threats, operations, and technologies shaping the Digital Age, DoD must value agility.

We fight as a Joint Force, with a collation of allies, yet much more work is needed. There is a lack of trust between DoD and Congress, the military Services focus more on their priorities than Joint needs, more can be done for international cooperation, and DoD’s relations with the defense industrial base and leading commercial tech companies can be improved.

As it can take months to staff a one-page memo through the Pentagon, many in DoD and Congress continue to value oversight over speed. There are far too many Hall Monitor organizations and cottage industries to ensure compliance with outmoded policies and statutes. It can take two years to formalize requirements via JCIDS, allocate a budget via PPBE, and approve program strategies.

The DoD made great progress in implementing the Middle Tier of Acquisition to enable rapid prototyping and rapid fielding. Some organizations continue to prototype and experiment with potential solutions. Yet the bureaucracy continues to impose legacy mindsets that every effort must have a cost, schedule, and performance baseline and assume a high success rate instead of experimenting and pivoting.

While OSD delegated decision authorities to most major programs to the Services, who delegated some to PEOs, there’s a trend of key officials seeking to rescind delegations and elevate many decisions to the most senior DoD boards. Can someone other than an Under Secretary of Defense decide which pilot project to spend $10M? Can someone other than a Service chief approve requirements for a rapid prototype?

Our major systems have some breathtaking and game changing technologies, yet DoD continues to lag China on adopting leading technologies. As DoD is no longer the primary driver of global R&D, it must harness commercial solutions which account for most of DoD’s critical technology priorities. Far too many technology research projects fall into the infamous Valley of Death, never to be integrated into an acquisition program and fielded.

It appears at almost every turn DoD values complexity over simplicity. Whether its in the system designs we develop to the processes to acquire them. Even when Congress directs in statute new streamlined, simple processes, the bureaucracy finds a way to impose complexity. To complement the exquisite billion dollar systems, DoD needs to invest in simpler, single mission systems with low unit costs, short lifespans, and iteratively acquire high quantities via a competitive marketplace.

DoD invented the ARPANET as the precursor to the internet over 50 years ago. Yet in this Digital Age, the DoD is in the stone age with public pleas to “fix our computers.” DoD needs to do so much more to share the knowledge across the enterprise on operations, technologies, and processes. AiDA was developed to demonstrate integrated, digital knowledge solutions which became the foundation of the AAF and Contracting Cone.

DoD regularly talks about innovation. DoD has an innovation board, an innovation unit, and an innovation ecosystem. Yet DoD struggles to rapidly harness defense and commercial technology innovations for military advantage. It has many attempts to reform the bureaucracy, yet few innovative ways to do business. As AI, autonomy, and quantum computing technologies emerge, DoD has mixed results on adapting its way of fighting to rethink operations and force structure.

It should come as no surprise that DoD rated poorly on most of the eight agility factors.

The new National Defense Strategy highlighted the Complex Escalation Dynamics with rapidly evolving domains and technologies. Furthermore it laid out:

“Our current system is too slow and too focused on acquiring systems not designed to address the most critical challenges we now face. This orientation leaves little incentive to design open systems that can rapidly incorporate cutting-edge technologies, creating longer-term challenges with obsolescence, interoperability, and cost effectiveness. The Department will instead reward rapid experimentation, acquisition, and fielding. We will better align requirements, resourcing, and acquisition, and undertake a campaign of learning to identify the most promising concepts, incorporating emerging technologies in the commercial and military sectors for solving our key operational challenges.”

The new DoD Strategic Management Plan covers a wide array of goals, objectives, and measures. Future updates should consider integrating more of these agility factors to enable the department to be more responsive to national security changes.