As DoD increases the use of Other Transactions (OTs) for greater speed and flexibility to acquire innovative technologies, it is important to assess how these agreements are working out, and ensure continuous improvement in their execution beyond oversight and compliance.

OTs are a valuable contracting strategy for DoD to do business with a broader range of innovative companies including small businesses and startups. Small businesses that lack the resources and desire to establish certified cost and accounting systems, extensive bid and proposal preparation, long timelines to award, and endless compliance requirements. OTs offer relief from those challenges as many regulations and statutes, including the FAR and DFARS, Competition in Contracting Act, Contracting Disputes Act, Cost Accounting Standards, and Truth in Negotiations Act, are not applicable.

When well planned and executed by knowledgeable Agreements Officers and programs, OTs enable greater simplicity, speed, and flexibility to reach agreement on novel research or prototyping technologies without requiring the full bureaucracy of government contracting. OT Consortia can award OTs (as a fee for service) for programs that lack expertise and/or resources to execute OT awards, as well as provide access to a diverse pool of vendors aligned to focus areas and established processes for efficient awards.

While DoD has used OTs since the 1960s, they’ve become more popular in recent years with the Army as the most active user of these flexible agreements. The increase in OT use is largely due to the amendment of the Prototype OT authority 10 U.S.C. §4022 (formerly 10 U.S.C. §2371b) by Section 815 of the 2016 National Defense Authorization Act authorizing direct follow-on production OT agreements or contracts for competitively awarded and successfully completed prototype OTs.

In Nov 2018, OUSD(A&S) published an updated Other Transactions guide for the acquisition workforce to effectively implement OTs, to include follow-on Production OT awards. OUSD(A&S) also published the Contracting Cone that outlines the full range of FAR and Non-FAR Contract strategies to include both Research and Prototype OTs. [Disclosure, we developed the Contracting Cone for OUSD(A&S).] Our MITRE Acquisition in the Digital Age (AiDA) team also maintains OTA pages with extensive guidance and a curated list of existing OT Consortia.

The following is a summary of these reports and commentary on their findings and recommendations.

The report highlights inconsistencies in verifying nontraditional contractor status, but also acknowledges that there is not a requirement nor any guidance to do so.

The report noted: Statute requires the DoD to meet one of the following conditions to carry out prototype projects:

It’s worth noting the audit was constrained to a sample of OT awards and used the phrase “did not always” which is not a strong case for justifying systemic issues.

The DoD IG postulates: “The DoD takes on more risk when it uses OTs to get participation from NDCs.” It claims that without validating NDC status or ensuring the NDC performs the requirements of the OT as proposed, statutory conditions may not be met. It further questioned resource share contributions aligning to the share agreement, but that alone doesn’t imply increased cost risk to the DoD.

To support their argument, the DoD IG cited a Navy OT agreement with questionable costs, to which the Navy non-concurred with the DoD IG finding/recommendation, and the DoD IG conceded and closed the issue. The DoD has operated with significant cost and schedule risk for decades with major FAR-based contracts with traditional defense companies. There are countless examples of millions and billions in cost overruns, years in schedule delays, and failure to meet required performance.

Congress continues to stress DoD must move faster to leverage commercial technology. Better use of existing tools like OTs can accelerate the identification, prototyping, and adopting of commercial technologies. In February, OUSD(A&S) published a report on the State of Competition Within the Defense Industrial Base. It highlighted:

OTs are a tool in the procurement toolbox to use, when appropriate, to reach companies that don’t regularly do business with DoD for novel research and prototypes. Just as successful research and prototypes conducted under OTs could transition capabilities into existing or new programs, small businesses and startups that start out under OTs can become members of the defense industrial base. By limiting use of OTs, the DoD risks not being able to access these non-traditional companies and their leading technologies.

The IG offered recommendations to improve rigor in OTs:

“We recommend that the Principal Director, Defense Pricing and Contracting:

DPC has been in the process of updating the OT Guide based on insights learned over the last four years. Given this is an online guide, it was designed to be easily and continuously updated.

The non-traditional defense contractor, per statute, is a company or business unit that has not performed on a contract that requires a cost accounting system (CAS) for at least one year prior to the date of the OT agreement.

Agreement officers could require the company to certify in writing that they have not performed on a CAS contract over the last year and verifying in government databases (to be listed in the update to the OT guide). This is like small business certifications.

“From FY19-21, DOD obligated over $24B on OTA awards to consortia for prototyping efforts, which included developing COVID-19 vaccines. These obligations represented nearly two-thirds of all DOD’s prototype OTA dollars obligated. In addition, of the 28 consortia that received OTA awards in this 3-year period, most were established since 2014 and managed by one of four organizations.”

The report provides background on the types of OTs and the use of OT Consortia run by consortium management organizations. It highlighted the different Consortium Management Organization (CMO) compensation models and practices.

The Army was the most prolific user of OTAs over the last three years, with half related to COVID-19. 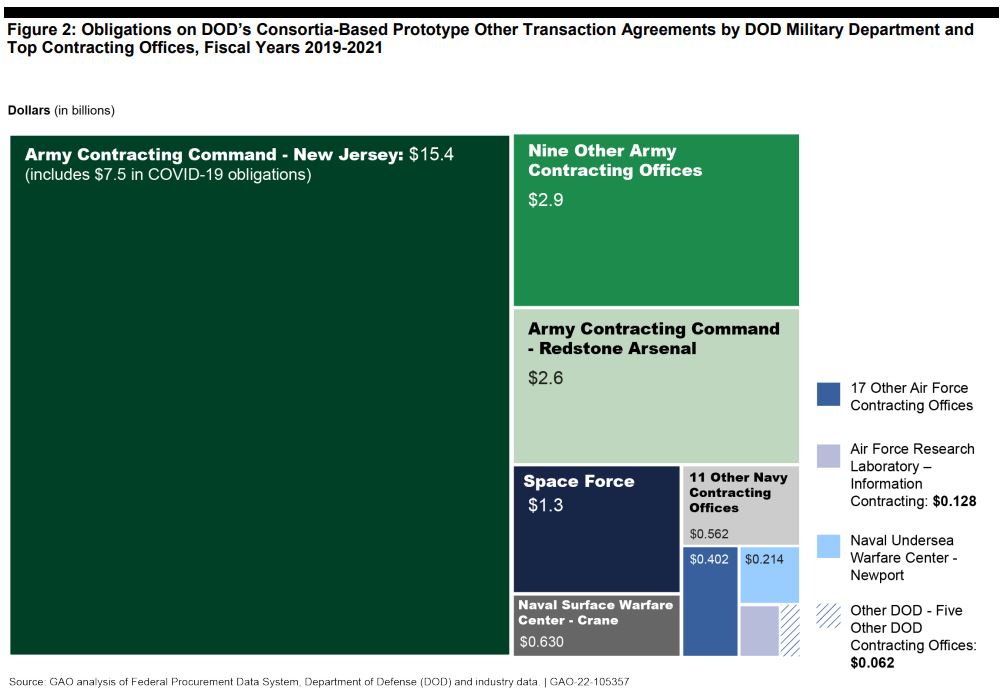 It is worth noting that COVID-19 obligations aside, DoD obligates $5-6B per year to OT consortia. The FY23 defense budget included $140B in RDT&E. 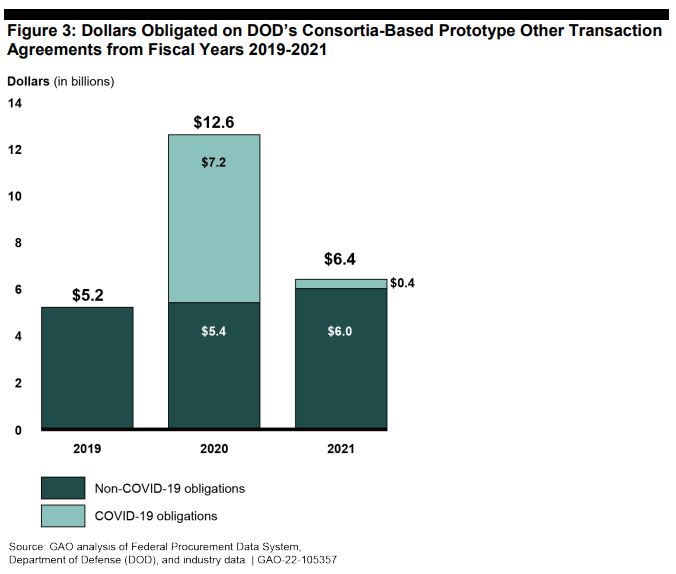 The GAO also summarizes the obligations in recent years via Stand-alone OTs vs OT Consortia. 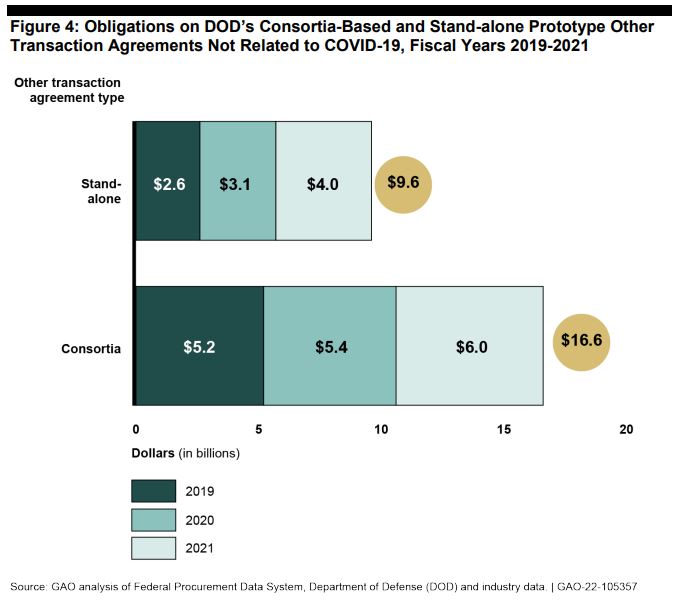 While Production OTs are available as logical follow-ons to successful prototype OTs, contracting personnel provided a few reasons why DOD did not award many consortia-based production OTAs:

While GAO was able to make many great charts and graphs based on OT Consortia data, it always seeks better insights for DoD and GAO. “DOD has collected some data on consortia-based OTAs, but it does not have data on the obligations each consortium has received because it does not have a systematic approach for tracking which consortia receive awards.”

Stephanie Halcrow and Moshe Schwartz published an insightful report on OT consortia for GMU’s Center for Government Contracting, The Power of Many: Leveraging Consortia to Promote Innovation, Expand the Defense Industrial Base, and Accelerate Acquisition.

The consortia model promotes innovation, expands the industrial base, and accelerates acquisition.

Based on the research, interviews, and data analysis, the authors found the consortia model supports government acquisition efforts by:

Their research shows most consortia members are nontraditional defense contractors (71-89%) and/or small businesses (56-75%).

From FY10 to FY20, total membership in the consortia surveyed increased more than tenfold, from 365 to over 5,600. Over 4,500 companies who traditionally do not work with DoD (nontraditional defense contractors) are participating in 12 consortia who focus on DoD procurement. 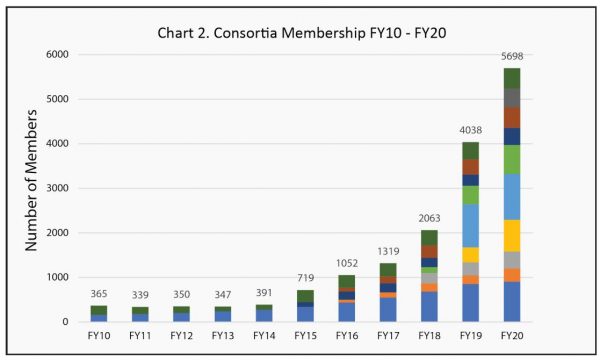 Additionally, the report emphasizes support for transparency and oversight in order to safeguard the interests of taxpayers and government but cautions against onerous legislation and regulations that have the potential to undermine the consortia model and OTs.

Other Transactions are a valuable tool for DoD to work with industry on terms that are more favorable for smaller firms and for prototyping activities where flexibilities can better enable collaboration. OTs can broaden the defense industrial base to foster competition and tap the leading technology companies. OT Consortia can lower contracting burdens on DoD organizations and industry to reach agreement in a timely manner.

Like most practices, there will be growing pains with increased adoption, and this is where increased education, training, and resources are critical to provide the workforce and industry. With DoD’s contracting workforce overworked and undermanned, Agreement Officers can augment the workforce to focus on OTs.

It is critically important that OTs be protected from the traditional FAR bureaucracy at all costs. This is either done by critics in Congress, those who do so out of muscle memory after decades of FAR contracts, or novices who are skittish of the broad flexibility who add FAR clauses assuming they’re reducing risk. OTs are among a series of efforts to ensure the DoD operates with greater speed and agility to be more responsive to the changing technologies, operations, and threats.