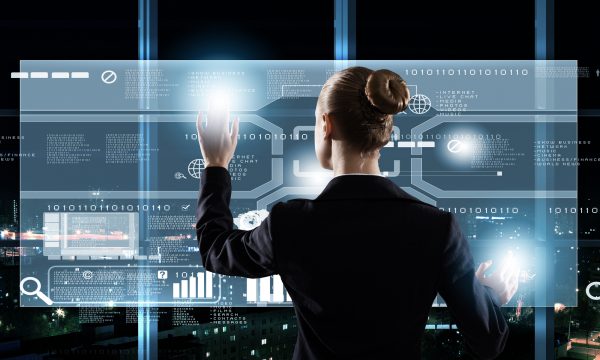 Emerging technologies aren’t just for the future. Contracting Officers can incentivize industry and academia to use them on Government contracts now and speed up their journey into the mainstream.

We are in that transition time where the technologies of tomorrow are emerging but not yet fully adopted. Transition times are difficult. The old way of doing business or gathering data or manufacturing parts, for example, is giving way to new processes, new authorities, new materials, new technology. At the same time, no one knows exactly how the new way will look.

To understand better how Contracting Officers and their Program Managers can team up to advance what we like to call “game-changing” technologies,  let’s pause for a quick moment to look at a hot new technology that was emerging in the 1980s that you probably feel you can’t live without today.

In the early 1980s, desktop computers were the size of a small refrigerator and resembled the blinking monstrosities on the set of 1960s science fiction TV shows. People went to college for degrees in “how to use computers.” They thought of computer science as an end product and not so much as an exponent for getting things done quickly or more accurately in daily life. In 2021, we manage our health, our finances, and our social lives by apps on our phones, but in the 1980s, that technology was not the domain of the average person and your kids certainly weren’t walking around with a computer that fit into the palms of their hands.

In 1987, as a new intern, I got into a ridiculous amount of trouble because I typed my own price memorandum agreement. All us of in Contracting had computers on our desks, but they were more or less just status symbols. They weren’t all connected to a network and, in many cases, not even a printer. Looking back, I’m not certain what we used them for, but I was determined not to let mine just sit unused on my desk.

The rules at the time—just to show you how segregated an emerging technology can be from those who can make the most use of it—were that I write a pricing document by hand and walk to the other side of the office to have a secretary try her best to interpret my terrible penmanship.  She would bring the scribbled document back to me hours or days (usually days) later as a freshly typed document from her computer that looked just like mine. Only secretaries were allowed to type and print contract file documents, not Contracting Officers or their buyers. You know where this is going, right?

I had handprinted my pricing document on lined notebook paper, complete with columns and numbers, and had taken it to my secretarial pool several times with it returned each time with errors or a blank space where my writing was illegible. After several tries, I could not afford to wait any longer.  Each try took days, not minutes, often because someone senior to me jumped the line and my document shifted to the bottom of the literal stacks of paper.

I was trying to get the contract awarded and that file folder off my desk. I had been an early adopter of new technology at home, so I was used to typing my own documents, spreadsheets, and briefings.

Why not? I thought.

I typed the document myself and sent it to the printer in the secretarial pool. When I retrieved it, I was encircled by several angry secretaries who told me that I was threatening their jobs and that I was not staying in my lane. Yes, simply by using the computer for a very basic function, I had crossed a line. It was inconceivable at the time that just anybody could use a computer.

Yes, as ridiculous as that sounds today.

But that’s the case with all emerging technologies that truly do emerge. In the early days and in the transition period, it’s hard to see the many uses of new technology and how it can fit into everyday life. As Contracting Officers and Program Managers, we probably don’t know all the potential uses of emerging technologies, not unless we collaborate with partners in industry and academia to find them and begin thinking ahead to how to level-up emerging technologies for all of us.

Here are several ways a Contracting Officer might incentivize industry/academia partners to look actively for opportunities within an emerging technology that they can incorporate into their proposed work:

If you as a Contracting Officer want to either force offerors to think about how to incorporate emerging technologies or invite them to bring their ideas to the table, then you should make their plan, however brief, one of the discriminators for selection. What you want them to cover in their plan or proposal will depend on what you are buying and what in particular you’d like an emerging technology to change in a positive way that will benefit both short-term and long-term.

For example, if you want to incentivize machine learning to improve speed and accuracy, then at least some degree of consideration for machine learning would be included in the proposal that wins the contract.

Also, I recommend you put some teeth behind your evaluation and incorporate their plan or otherwise capture the goodness of their proposal in the contract so it’s binding.

Incentive on new or existing contracts

Incentives to look for opportunities to utilize an emerging technology can be written into a new contract or even negotiated into an existing contract. For example, a Contracting Officer working on a Program of Record that has obsolescence issues might want to incentivize use of additive manufacturing for replacement of parts. The Contracting Officer might use a contract line item number (CLIN) that sets aside specific funding for savings or a portion of savings passed along to the Government.

The Contracting Officer might also build the incentive into the weighted guidelines when determining the Government objective for profit/fee, or the Contractor might propose profit based on what cutting-edge ideas they bring to the table.

These aren’t the only ways of incentivizing industry and academia to level-up an emerging technology. Creative Contracting Officers can probably think of several more ways that would be specific to the contracts they write or administer. The point is to guide the use of emerging technologies into the mainstream as soon as viable.

Both the Government and industry/academia partners should be actively looking for ways to make these technologies a normal part of our lives just as much as computers, even those handheld ones we call smart phones, are now part of our daily lives, all in ways that can improve the speed and quality of delivery both in the present and in the future.