Considerations of Doing Business with the DoD

Managing supply chain risks is an area of Federal acquisition that has gained greater attention the last few years due to an improved understanding of the potential risks to Government systems. Conducting business with the DoD or the U.S. Government calls for an understanding the source of this focus, the latest policy developments, and potential information that you may be asked for to verify the security of their supply chain or to assist in the program protection planning of a Government system. If operating in the technology space, especially as it relates to a defense weapons system or important Government system, you must be very cautious of foreign capital and the potential or perceived influence of that capital.

A major development in Government officials gaining an understanding of potential supply chain risks posed by foreign adversarial governments was a study conducted by the Defense Science Board in 2017 titled the “Task Force on Cyber Supply Chain”. In it, they found that the United States’ weapons systems are at risk from the malicious insertion of defects or malware into microelectronics and embedded software, and from the exploitation of latent vulnerabilities in these systems.

They recommended that the DoD take various actions, to include:

Another threat to the DoD supply chain was illuminated in a September 2018 report to the President titled“Assessing and Strengthening the Manufacturing and Defense Industrial Base and Supply Chain Resiliency of the United States.” In it, the authors highlighted that the Chinese Communist Party’s “Made in China 2025” initiative was targeting key innovative technology sectors in the United States, such as artificial intelligence; quantum computing; robotics; autonomous and new energy vehicles; high-performance medical devices; high-tech ship components; and other emerging industries that are all critical to national defense.

The report noted that China relies on both legal and illicit means, including foreign direct and venture investments, open source collection, human collectors, espionage, cyber operations, and the evasion of U.S. export control restrictions to acquire intellectual property and critical technologies. In terms of foreign direct investment, the Chinese government allocated $46 billion in 2016 for U.S. technology sectors. This represented triple the previous year and a tenfold increase from 2011. The below figures illustrate how China is targeting key technology sectors with its state-supported foreign direct investment. 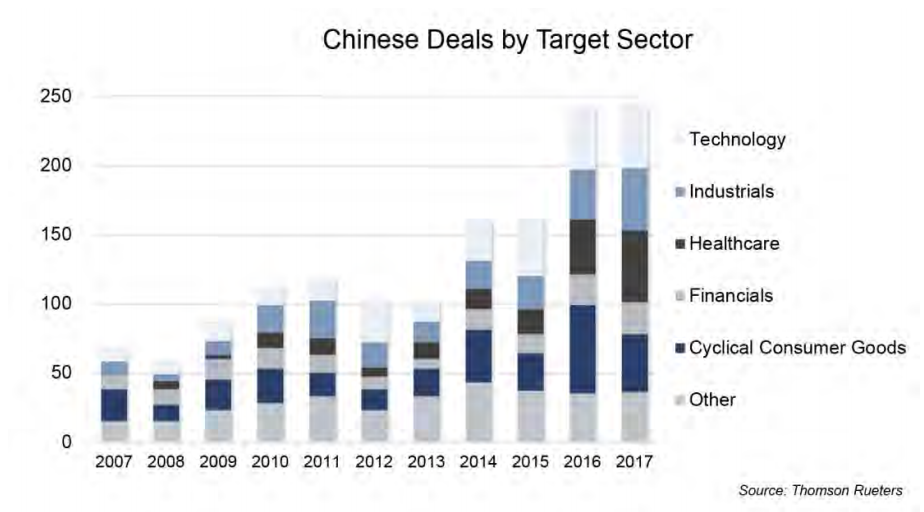 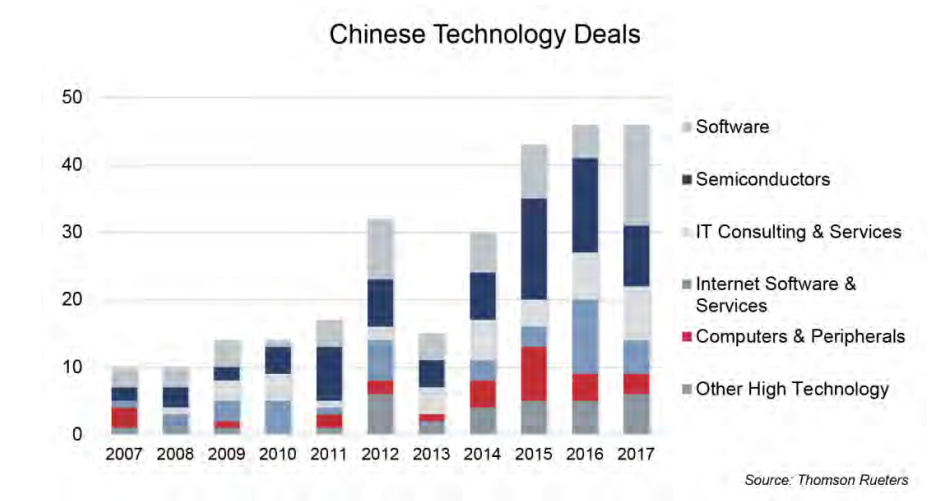 In response to these threats and the increasing potential that U.S. firms may trade managerial control in return for Chinese Communist Party financial investments, the Foreign Investment Risk Review Modernization Act (FIRRMA) of 2018 was passed by Congress and signed into law by the President on August 13, 2018. This act strengthened and modernized the capabilities of the Committee on Foreign Investment in the United States (CFIUS) to address national security concerns more effectively, including broadening the authorities of the President and CFIUS to review and to take action to address any national security concerns arising from certain non-controlling investments and real estate transactions involving foreign persons.

Under FIRRMA, a U.S. company that “produces, designs, tests, manufactures, fabricates or develops one or more critical technologies” may undergo heightened scrutiny by CFIUS. There are 14 broad categories of technology which are expected to be focused on:

To trigger the mandatory CFIUS filing requirement under current regulations, the U.S. business which receives foreign investment must also operate in one of 27 high-risk industries identified by their North American Industry Classification System (NAICS) code:

Check out this CFIUS tool that helps you assess potential CFIUS filing obligations or compliance with law (Note: this does not constitute endorsement of the firm).

The Committee on Foreign Investment in the United States (CFIUS) is a Federal interagency committee chaired by the Secretary of the Treasury. Additional members of CFIUS include the Secretaries of Homeland Security, Commerce, Defense, State, Energy, and Labor, the Attorney General, the Director of National Intelligence, the U.S. Trade Representative, and the Director of the Office of Science and Technology Policy. 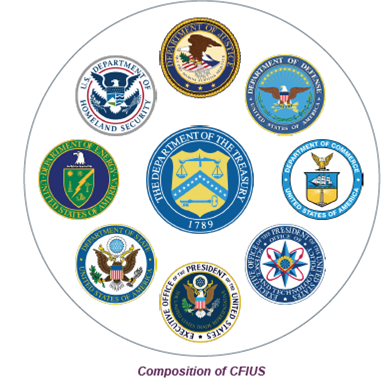 CFIUS was created in 1988 by the Exon-Florio Amendment to the Defense Production Act of 1950. CFIUS’ authorizing statute was amended by the Foreign Investment and National Security Act (FINSA) of 2007.

This statutory framework authorizes the President of the United States (through CFIUS) to review “any merger, acquisition, or takeover … by or with any foreign person which could result in foreign control of any person engaged in interstate commerce in the United States.”

In Executive Order 13873 of May 15, 2019, titled “Securing the Information and Communications Technology and Services Supply Chain”, the President identified that “foreign adversaries are increasingly creating and exploiting vulnerabilities in information and communications technology and services, which store and communicate vast amounts of sensitive information, facilitate the digital economy, and support critical infrastructure and vital emergency services, in order to commit malicious cyber-enabled actions, including economic and industrial espionage against the United States and its people.”

To counteract this threat, the President prohibited: any acquisition, importation, transfer, installation, dealing in, or use of any information and communications technology or service where the transaction has been determined to involve:

In February 2015, the Director of National Intelligence testified that cyber threats to U.S. national and economic security are increasing in frequency, scale, sophistication, and severity of impact. The Council of Economic Advisers, an agency within the Executive Office of the President, estimates that malicious cyber activity cost the U.S. economy between $57 billion and $109 billion in 2016, with some estimates putting that number much higher. Cybersecurity is a critical aspect of weapons systems design, and over the last few years its criticality has gained much more attention.

However, it has also been realized that it is not enough to just secure the weapons system. U.S. adversaries have been able to exploit vulnerabilities across the larger DoD supply chain by stealing intellectual property and potentially compromising important systems. These vulnerabilities can be found in contractor facilities, including design, development, and production environments, networks, supply chains, and personnel, which can act as cyber pathways for adversarial actors to access Government program organizations or fielded systems to steal, alter, or destroy system functionality, information, or technology.

A 2015 Government Accounting Office (GAO) report highlighted that not all cyber intrusions result from unintentional threats “caused by, among other things, defective computer or network equipment, and careless or poorly trained employees” and that cyber incidents are on the rise, which demands a Government response. 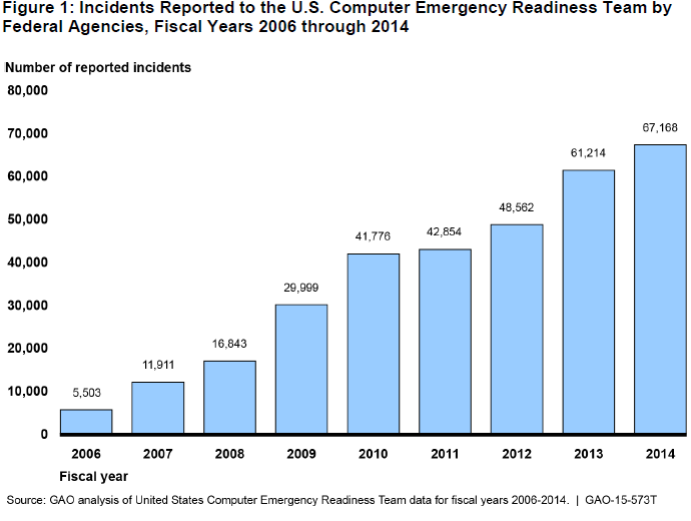 To ensure that the larger Defense Industrial Base (DIB) supply chain has the appropriate level of cybersecurity to stem the loss of Controlled Unclassified Information (CUI), the Undersecretary of Defense for Acquisition and Sustainment (USD A&S) initiated the CMMC initiative. The intent is to incorporate CMMC into the Defense Federal Acquisition Regulation Supplement (DFARS), building on to clauses already in existence (such as DFARS 252.204-7012) and to eventually use it as a requirement for contract award. To date, OMB has not instituted the DFARS revision, so there are no mandatory CMMC requirements currently in place. If implemented as envisioned, CMMC will encompass multiple maturity levels that range from “Basic Cybersecurity Hygiene” to “Advanced/Progressive.”

Note that CMMC certification does not denote achievement of supply chain security nor represent the entirety of cybersecurity measures that your company might want/need to adopt. 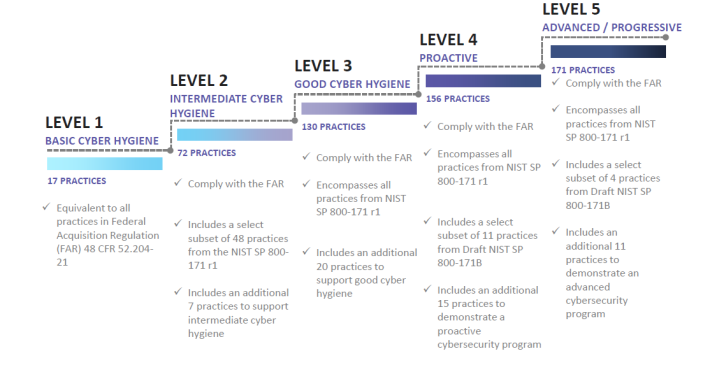 To be determined, but expected CMMC assessment costs will depend upon several factors to include the CMMC level, the complexity of your company’s network, and other market forces.

Your company will be expected to demonstrate both the institutionalization of the processes and the implementation of the practices to certify at that level. Source: CMMC Appendices 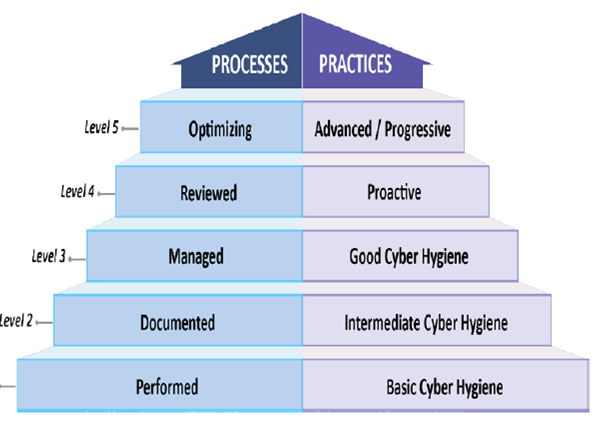 To this end, when competing for and negotiating a DoD contract or agreement, you will increasingly notice that there is a heightened focus from Government program officials on ensuring that the product you are providing has a secure supply chain both for hardware and software. You may notice this in a variety of ways: