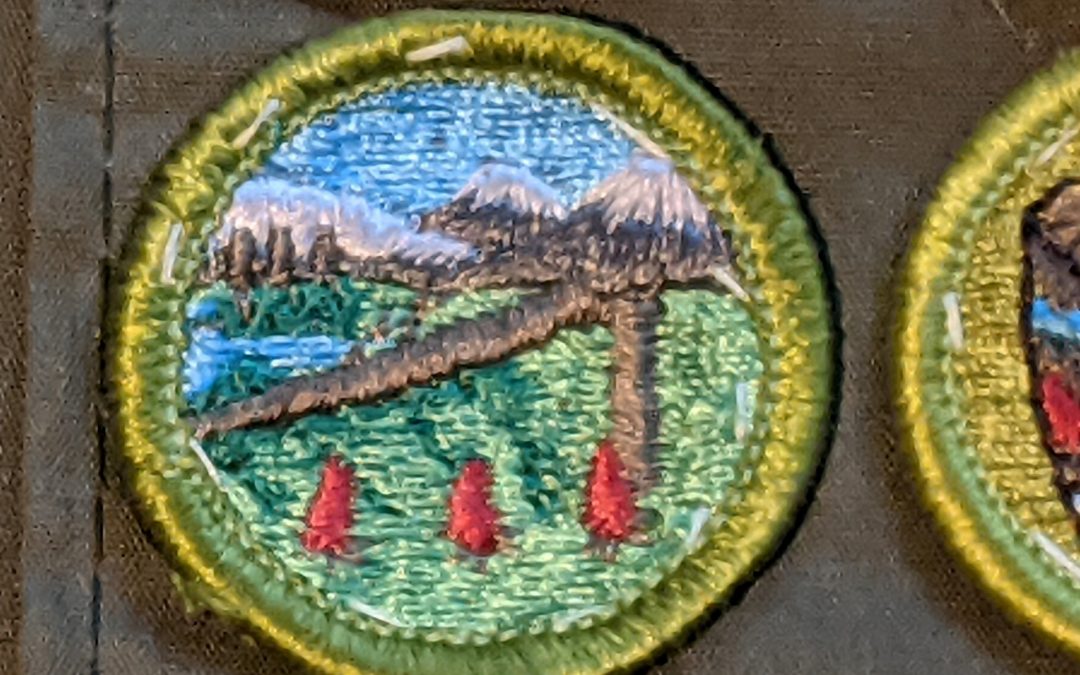 The sun was setting as my buddy Ryan and I finished building our survival shelter, one of our last requirements to earn the Wilderness Survival merit badge. Well, I assumed the sun was setting. The thick forest around us and even thicker rain clouds above made it hard to tell when sunset actually happened. All I knew for sure is that it was getting dark, we were cold, wet, and hungry, and we really wanted to move on to the next step in our Boy Scout summer camp adventure: starting a fire.

So we quickly assembled a tiny collection of kindling – twigs and pine needles and such – then formed them into a pile around the small bit of tinder we’d brought along with us in our waterproof survival kits. That handful was the only dry material in sight on this rainy afternoon, and we complimented each other on our foresight and planning. Ryan held his poncho over us both as I coaxed sparks from a flint and steel fire starter. We cheered when a spark ignited the tinder, then watched with a growing sense of pride as the flame spread to the kindling. That’s when we realized our mistake.

“Quick,” Ryan said to me a second before the words came out of my own mouth. “Go get some bigger sticks!” Too late, we looked at each other dumbly as the flame burned through the only dry fuel we had… and then sputtered out completely. True story.

The same situation happens in DoD innovation programs all the time. Someone comes up with a cool new idea, a spark that brings an exciting bit of light and a little heat, and has the potential to scale up to a full bonfire. Then the project burns out before we assemble the resources necessary to keep the thing going.

The funny thing is, the woods around us that night were chock full of fallen branches. Collecting them before lighting the tinder wouldn’t have taken more than a few minutes, and even though the wood was damp, a few moments with a pocketknife would quickly reveal each stick’s dry interior. We might have even produced some dry wood shavings to add to the fire. Instead, we rushed to the ignition step before we had anything substantial to burn.

We didn’t win any prizes for igniting our kindling so quickly. Lighting those twigs prior to assembling larger sticks into an actual fire structure was not an example of admirable speed, and it certainly did not produce enough heat to warm our fingers, much less cook our supper. Instead, it was a short-sighted rookie mistake (we were 11 years old after all). We were being hasty, not fast, and our failure to make the necessary preparations meant our fire took more time to get started, not less.

I think of that rainy night in the woods every time I hear about some rapid innovation idea that goes nowhere. I think about how exciting it was to see the spark jump from my flint onto the tiny flammable bundle… and how quickly my excitement turned to embarrassment. I think about it when I hear complaints that someone came up with a great idea but had no contracting vehicle available, no sustainment plan, no user organization ready to receive the latest brilliant new product. The problem is not that such things don’t exist, are impossible to assemble, or take too long to develop. No, the problem is that we neglected taking those steps early in the project, often in the name of speed and simplicity, even though the fastest and simplest path to a successful delivery involves doing them rather than skipping them.

For an innovative idea to ignite and spread as quickly as possible, we must lay the groundwork for future activities like tech transition and sustainment early in our effort. Speaking as someone who deeply values rapid innovation projects (and has led several), I can confirm that it is essential to have early and frequent conversations with people from contracting, finance, legal, and other functionals. It’s absolutely critical to foster relationships with users and sustainers. In broad terms, it’s important to establish buy-in from the people who will be involved with the project for the long haul – the people who can make sure the funding, contracts, and other essential elements are in place when they are needed. Their formal contributions may come later in the innovation cycle, but their involvement should begin right away. Leaving them out of the initial efforts makes as much sense as lighting your kindling before you’ve even looked for larger branches.

The good news is, none of this has to take a lot of time, so please don’t misunderstand this story as a recommendation to slow things down. Just as Ryan and I didn’t need to chop up a whole chord of wood for our fire that night, neither do we need an endless series of bureaucratic permission-seeking meetings and reviews. Quite the opposite. We simply need to make some initial arrangements – collecting a few sticks, exploring a few contracting options, cultivating a few partners – before the need becomes urgent.

Having these conversations and building these relationships on the front end doesn’t slow a project down. They accelerate the overall effort, and are the key to making rapid progress. In contrast, failing to have these conversations will slow you down or even stop you all together.

Postscript: In case you’re wondering how the camping story ends, I seem to recall one of the older Scouts took pity on us and let us share his fire. There’s probably a lesson in there too…