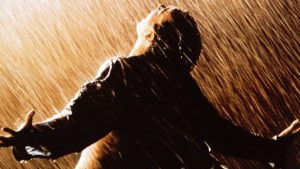 It feels like soft mud under your feet and cool rain on your eyelids and a crack of thunder above you. It feels like freedom.

We talk a lot about the culture in Acquisition and how to change it. Basically, we know it’s bad, stifling, negative, bureaucratic. We know it needs to change if we are to survive and flourish. We know it’s outdated, slow, oppressive.

But do we know what a truly innovative culture looks like? Other than, “Not this”?

One of my favorite movies is “The Shawshank Redemption.” When I’m flipping channels and catch any part of it, I will drop into a chair and watch the rest, every single time, even though most of the TV versions have edited out some of the nuances. I apologize in advance for any spoilers, but it’s been out for 25 years, so if you haven’t seen it yet, that’s on you.

When the elderly prisoners are finally released after decades of being institutionalized, they have a hard time adjusting to their newfound freedom. Some can’t take it and figure out ways to get back into the culture they just left or out of their misery. Others struggle to embrace their new culture with its lack of restrictions. Some were kicked out of the culture they’d become accustomed to after a lifetime and others planned their escape for years and made the break when they could.

My first few months out of Acquisition’s bureaucratic culture of the last three decades were the hardest. I had thought I would be instantly like Andy, the prisoner who struggled against the system for years, tunneling out one pocketful of dirt at a time, who felt the freedom the moment he left the institution. Instead, it was Red, the old prisoner who is finally paroled after he is a used-up shell of a man, with whom I initially resonated. I had, like Red and Brooks, become “an institution man,” that institution being the Federal Acquisition field.

The surprise for me in leaving one culture for another was that I still carried the old Acquisition culture with me. Not that I liked that realization, but it took a few months to get used to and to shed, though I’m still shedding it and probably will for a while. I, like most of my colleagues, had been “institutionalized.” We’d gotten used to our walls. After years of adhering to a particular culture and following its rules, written and unwritten, it’s harder than you might expect to shift your mindset. Freedom and a culture of innovation around you full-time takes getting used to.

There’s a favorite scene of mine at the end of “The Shawshank Redemption” where Red has been paroled and is living in a boarding house and working in a small grocery store. He exasperates the store manager by asking for a bathroom break and the manager tells Red he doesn’t have to ask, just go.

Red, however, says, “Forty years I been asking permission to piss. I can’t squeeze a drop without say-so.”

The first time I watched “The Shawshank Redemption” after leaving the culture I’d been part of for 31 years, I climbed up on my bare feet on the sofa and started yelling at the TV. I understood! After asking permission (or, more often than not, having to ask forgiveness), the pathway in your brain says you need to keep asking permission (or forgiveness). It takes effort—and great joy—to be allowed and to allow yourself not to worry about where thinking creatively will land you.

Once you’ve physically escaped the culture that holds you back, expect a little bit of an uphill battle to leave it behind psychologically as well.

Then be like Andy: arms over your head and joyous at what lies ahead.

As Andy says in his letter to Red, “Hope is a good thing.”